Dr. Pamlea Rutledge is the Director of Media Psychology Research Center.  Her recent Transmedia Case Study:  The Three Little Pigs gives a good example of how to take a story and make it transmedia. 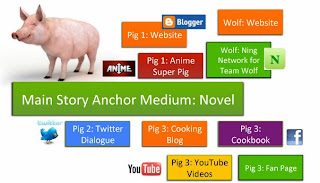 The basic story would be told in an anchoring medium, such as a novel, TV show, or film. In this case, it’s a short story.  There are four primary characters to expand and explore: three pigs and a wolf. There are also deeper themes of hard work, planning, collaboration, family and persistence underlying the main story arc.

The first round of expansion:
Pig 1 has a blog which details the family history and complicated family dynamics that led to the pigs decision to live apart rather than together. Pig 1 also harbors paranoid suspicions of a dark figure lurking about his house and a conspiracy theory of a cover-up by local authorities that contributed to the interfamilial conflict.
The wolf has a website would give us opportunities to learn more him, the path that led the wolf to his current antisocial tendencies, and give us a glimpse of his complex inner genius, such as showing his mathematical schematics of the impact of wind velocity on the materials of straw, sticks and bricks. We would also be able to find maps of the turnip field, apple tree, local market and County Fair and strategic attack positions. We would follow the wolf as he plots and adjusts his plans at each volley by the pigs and contribute ideas and support.
The second little pig, Pig 2, takes to Twitter. Given that his house of sticks didn’t do very well under Wolf breath, he has become very interested in rebuilding with sustainable building materials and exchanges tips with his Twitter followers. He tweets breaking news during any PigLand events such as a Wolf attack. @littlepig2 walls of house bowing inward, sticks flying off roof – help
The third little pig, Pig 3, is a hardworking homebody. He keeps a vegetable garden and creates a cooking blog and cooking demo videos for YouTube shot on location in the House of Stone. His recipes, such as such as Parsley Turnips, Baked Apples, and Stewed Wolf Surprise are made using only local, organic ingredients.
The second round of expansion:
On a Ning network, Wolf supporters form Team Wolf and contribute strategy, information, additional maps, and alternate endings and plot developments.  An Anime comic takes fans on the first little pig’s visions of a pig super hero uncovering the conspiracy, saving the world and avenging evil as personified by wolves.
Pig 2 posts eco-friendly home designs and materials on Pinterest and holds a contest for homes make from sustainable building materials
The third little pig has a cooking series shot on location from the Stone House kitchen posted on YouTube with ways to make Parsley Turnips, Baked Apples, and Stewed Wolf Surprise. He hides clues for secret ingredients in his dishes in lyrics of songs and the YouTube trailers and encourage viewers to send in their stories about home cooking and wolf encounters to be shared on a website. He publishes a cookbook with recipes, clues to the location of the remaining house of stone, and phone numbers with changing recorded messages of cooking tips and pig gossip.
Additional expansion:
The Three Little Pigs II – The Sequel
A new game called “Angry Pigs” is available for download at the Apple Store involving pigs, wolves and wind velocity.  Pig 3’s videos showcase occasional trips to the Local Market and County Fair, where additional characters can be introduced.  The pigs in PigLand can link with other story worlds, like Little Red Riding Hood or Puss n’ Boots, where there are opportunities for Wolf collusion for hard core fans.

The hypothetical transmedia version of the Three Little Pigs is not the repurposing of story across different platforms. It is the creation of a holistic narrative that unfolds in different and unique manners across different media. It allows for a dialogue between creator and participant.

Developers could decide if participant interaction, such as solving the sustainable materials problem, finding the wolf through clues and maps, or creating another character for the story, could move the story in different directions than the original version. Participants might urge the first little piggy to trust his instincts about the dark figure or create a hunter who steps up the stakes for the wolf and alters the time dimension of the wolf’s schemes.

Check out Ellliot Worley's 3 Little Pigs (animated by his dad).