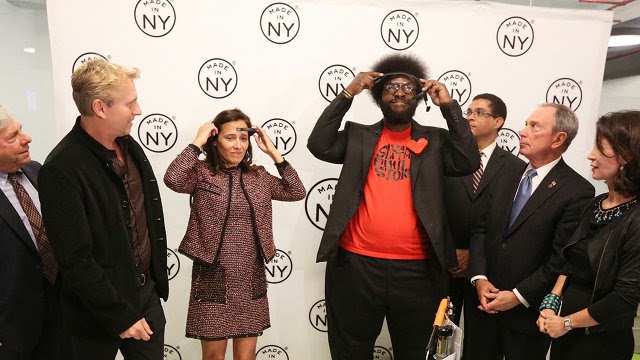 The IFP Media Center opened in September  in Dumbo, Brooklyn. The Made in NY Media Center by IFP is a multi-disciplinary creative space with over 20,000 square feet at 30 John Street in Dumbo, Brooklyn. The space was until recently a split-level shipping/receiving/truck parking area.  The space is sliced into several sections wi th the lower area acting as a large incubator and the upper area a short-term open workspace for creatives in the media fields.  The space includes classrooms, conference rooms, editing rooms as well as a screening room, library, cafe, and rest rooms.  The Media Center website tells:

DUMBO has long been home to individuals and companies with equal parts creativity and business acumen. The combined density and diversity of the neighborhood, and New York City as a whole, allows us to tap into an abundant wealth of knowledge and industry – from Madison Avenue to Wall Street and the Tech Triangle to independent content creators all over our bustling city.  Historically, 30 John Street has been home to creative types. Starting with Arbuckles Ariosa Coffee in the late 1800s, the building was originally home to a growing coffee factory. The Arbuckle Brothers, inventors in their own right, designed a machine that efficiently roasted, ground and packaged coffee for mass distribution. In later years, the space had subsequent incarnations as a whiskey storehouse for the Kinsey Distilling Company and a warehouse for A&S, Brooklyn’s leading department store. In the latter half of the twentieth century, the space was repurposed for offices and studios for creative professionals.  As home of the Media Center, the space will return to its original function as a site for manufacturing—but this time around, the incubator at 30 John Street will brew stories and ideas. And instead of products leaving the doors via railway car or ship, these digital creations will be beamed around the world to be uploaded, downloaded, streamed—and perhaps even shown on a local screen near you.

To learn more read this article from Fast Company

The space is intended to give media projects and media creatives a chance to work indepently and creatively in a community.  Check out the Color Project:


The Color Project at IFP Media Center from MPC Digital on Vimeo.
Posted by Dr. Scott at 12:54 PM